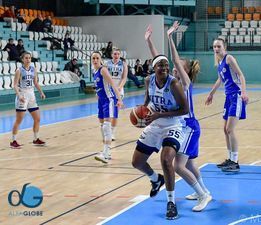 In Slovenia, Grosuplje hosted Triglav but really had no chance against a more talented team (50-104). Lejla Omerbasic scored 9 points and added 5 points and 3 assists for the winners.

In Slovakia, Slovan lost to Nitra at home in a close game (54-55). Camesha Davis once again led Nitra with another double double (12 points and 11 rebounds).

In Croatia, Sibenik defeated Pozega (79-73) in a close game. Mariah Smelser had another double double for the guests (22 points, 10 rebounds).

In Sweden, Telge Basket had no problem vs newcomers Wetterbygden (74-54). Stephanie Gardner scored 2 points and added 3 rebounds and assists for the guests.

In Portugal, Carnide won at home vs Benfica after a hard fought battle (77-74). Treyvonna Brooks had a nice all around performance for the home team (7 points, 6 rebounds, 4 assists).

In Poland, Siedlce lost a tied game at home vs Ostrovia (74-77). Samra Omerbasic did not play much (only 8 minutes).