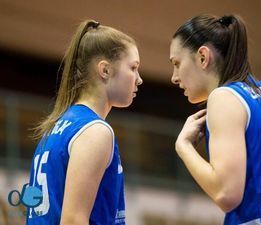 In Slovakia, Nitra started its play off series vs Slovan and won the first game (74-53). Camesha Davis proved to be the undisputed leader of Nitra and finished the game with another big double double (27 points, 14 rebounds).

In Portugal, Carnide defated Quinta dos Lobos (71-65) and made it to the play offs. Treyvonna Brooks contributed with another double double (19 points, 11 rebounds).

In Poland, Politichnica defeated at home Siedlce (95-59) but Samra Omerbasic really impressed under the boards scored almost half of Siedlce points (23 points) and added 11 rebounds. A great achievement indeed.

In Croatia, Brod na Savi lost at home vs Pozega and helped the guest to get one more chance to avoid relegation (42-68). Actually, the last game of regular season vs Pula will be a do or die for Pozega. Mariah Smelser once again dominated on both ends of the court (23 points, 22 rebounds).