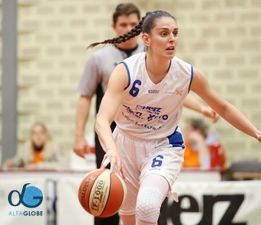 In Bosnia, Orlovi defeated easily at home Jedinstvo (89-58). Aleksandra Begenisic dominated under the boards- 19 points, 14 rebounds and 4 assists in only 24 minutes on the floor.

In Croatia, the weekend did not go well for Alexis Carter who got injured at the beginning of game vs Ragusa. Her team FSV did not have a chance without her in Dubrovnik (94-49). Pozega was not able to win a very important game vs Split (63-70). Without Princess Davis who missed the game due to family reasons Jessica Warren (15 points, 14 rebounds) and Andrea Glomazic (6 points, 6 rebounds and 5 assists) did their best but it was not enough.

In Slovenia, Triglav won a tied game vs Lendita (73-71). Lejla Omerbasic led the home team with 22 points and 6 rebounds.

In Romania, Tg Secuiesc lost at home against Arad (55-77). Veatriki Akathiotou had a nice game for the guests (9 points, 7 rebounds, 4 assists). In the derby of Bucharest Rapid defeated Agronomia (67-59). Jordan Hawkins benefited from her move to Romania and had a great double double (17 points, 16 rebounds) while Marquita Daniels had 4 assists and 2 rebounds. Orade hosted Sirius Mures and was not able to get the first win (46-64). Four Alfa Globe girls clashed in this game. For the winners Brittney Dunbar and MC Smesler scored 8 points each while for the home team Teodora Saric responded with a double double (19 points, 10 rebounds) and Allison Zalin added 3 points and 6 rebounds.