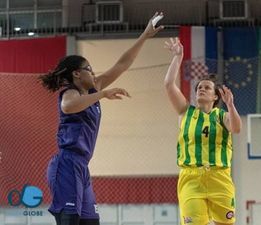 In Croatia, Zadar hosted Pozega and lost a very important game (66-76). Jessica Warren demolished the home team with a double double (28 points, 20 rebounds). She proved once again that she fully adjusted to basketball in Europe. Andrea Glomazic contributed with 7 points and 5 rebounds.

In Slovenia, Maribor defeated Triglav although Triglav won the game (62-69). Actually the guests played with more foreigners than its allowed by the KZS rules and the game was registered 20-0 for the home team. Lejla Omerbasic had 9 points and 5 rebounds but the stats will not count.

In WABA League Orlovi surprised Red Star (76-64) and got the first win of the season. Aleksandra Begenisic was crucial in defense (6 points, 15 rebounds.

In Romania, Sirius Targu Mures lost at home vs Cluj (47-82). Brittney Dunbar played a great game for the home team (16 points, 9 rebounds, 5 assists). Agronomia defeated Alexandria (70-54) thanks to a great performance by Jordan Hawkins (20 points, 20 rebounds, 4 blocked shots). Arad was just too good for Oradea (78-27). Veatriki Akathiotou contributed with 13 points and 4 assists. On the other side Teodora Saric had 7 points and 9 rebounds.