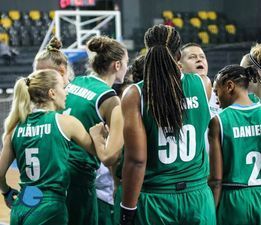 In Romania two rounds were already after the short New year break. Oradea lost at home vs Targu Mures (51-69). Teodora Saric had a solid performance again (10 points, 9 rebounds) but it was not enough to help the winless Oradea. On the other side, Brittney Dunbar once again proved that class is eternal- 12 points, 13 rebounds, 9 steals, 8 assists... MC Smelser contributed with 7 points and 5 rebounds to the win. Agronomia defeated at home Rapid, the city rival (74-62). Jordan Hawkins once again demolished the rivals' posts and had another double double (21 points, 18 rebounds). Tijana Ninkovic, the new addition to Agronomia, is expected to play her first game in the next round. Arad outscoured Targoviste at home (63-56) and Veatriki Akathiotou played a solid game (8 points, 3 rebounds and assists). Constanta defeated Alexandria at home (51-46). Katarina Matijevic contributed with 2 points and 5 rebounds.

In Slovenia, Triglav was defeated at home by Konjice (56-65). Lejla Omerbasic scored 5 points and added 2 rebounds for the home team.

In Bosnia, Mladi Krajisnik lost at home vs Orlovi (43-77). Experienced post played Aleksandra Begenisic helped the guests with another double double (18 points, 13 rebounds). Jedinstvo lost at home vs Celik (71-99). Keyera Eaton played well in her first professional game (18 points, 7 rebounds, 4 assists) but it was not enough to get a home win.