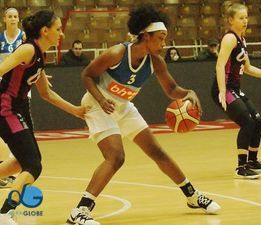 In Bosnia, Konjic hosted Jedinstvo but had no chance against Keyera Eaton who in her second game as a professional simply dominated (27 points, 5 rebounds and 4 assists). Eaton has already proved that she would be able to take the young Jedinstvo team on her shoulders this season. Orlovi got an easy home win vs Leotar 03 (84-63). Aleksandra Begenisic played another great game (15 points and 15 rebounds) vs her home team.

In Slovenia, Ilirija hosted Triglav but lost the game (65-81). Lejla Omerbasic had a great performance for the guests (20 points, 6 rebounds).

In Romania, Sirius Targu Mures hosted Agronomia and in a very interesting game got a deserved win (72-61). The words can not explain the impact Brittney Dunbar has had on her team so far this season but lets try with stats- 16 points, 18 rebounds, 10 assists and 7 steals....so close to a quadruple double! Mariah Smelser missed this game due to an injury. On the other side, Jordan Hawkins struggled against a great defense that was focused only on her. She produced 2 points and 5 rebounds but was unable to get the ball most of the time because the opposite team had three players watching her. Tijana Ninkovic made her pro debut and played 3 minutes for the guests. Rapid defeated Constanta in a close game (74-71). Katarina Matijevic had 2 points and a rebound for the guests.

In Croatia, Tresnjevka had no problems vs Pozega (114-54) and the home team's task was easier because the guests played without Jessica Warren who missed the game due to an injury. Andrea Glomazic scored 4 points and added 8 rebounds for the guests.