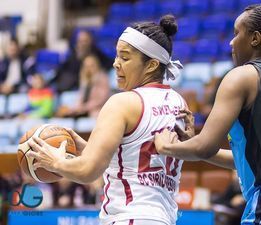 In Romania, Sirius Targu Mures hosted Constanta and surprised everyody with a great come back in the 4th quarter (56-54). A very tied game was decided by American duo- MC Smelser (20 points, 6 rebounds) and Brittney Dunbar (22 points, 12 rebounds, 4 assists). On the other side Katarina Matijevic scored 4 points and added 3 rebounds. Oradea hosted Agronomia and despite a great performance lost at home (61-72). Teodora Saric once again led her team with 17 points and 12 rebounds. Agronomia was led by Jordan Hawkins who had another double double (11 points and 14 rebounds). Tijana Ninkovic contributed with 2 points, 3 steals and 2 rebounds.

In Bosnia, Jedinstvo lost at home vs league champion Banovici (54-96) but Keyera Eaton had another amazing performance for the home team- 30 points, 14 rebounds and 6 assists. Celik hosted Orlovi but lost against a team with much deeper rotation (63-75). Aleksandra Begenisic once again led her team with a double double (16 points, 11 rebounds).

In Croatia, Pozega was defeated at home by Medvescak (65-82). Jessica Warren had another double double for her birthday (14 points, 16 rebounds) while Andrea Glomazic had 1 rebound and 1 assist.

In Slovenia, Triglav had no problems vs Grosuplje (78-47). Lejla Omerbasic contributed with 7 points, 4 rebounds and 4 steals.