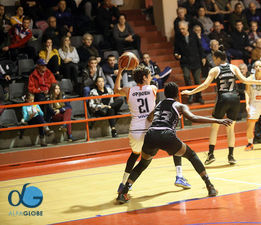 In Bosnia, Rudar hosted Jedinstvo but did not celebrate (74-86). Keyera Eaton struggled a bit with her shooting percentages but had a nice all around game for the winners (13 points, 5 assists and 5 steals). However, the game of the round was another clash between two strongest teams in Bosnia- Orlovi and Banovici. In Banja Luka Orlovi defeated the champions (69-60) thanks to another great performance by Aleksandra Begenisic (13 points and 13 rebounds) who led the home team to a big victory.

In Romania, Rapid was outscored by Sirius Targu Mures (64-67). Brittney Dunbar had a tripple double for the guests (10 points, 10 steals and 13 rebounds along with 7 assists) while Mariah Smelser contributed with 11 points and 5 rebounds. Constanta won against Oradea at home (89-39). Katarina Matijevic contributed with 4 points and 14 rebounds. On the other side Teodora Saric had a double double (14 points, 12 rebounds). Sepsi defeated Arad (61-50) and Veatriki Akathiotou had 2 points, 4 rebounds and 3 assists for the guests. Agronomia lost in a low scoring game vs  Tg. Secuiesc (40-53). Jordan Hawkins played another solid game (14 points, 6 rebounds) while Tijana Ninkovic added 3 points, 1 assist and  1 rebounds.

In Croatia, Zagreb played a very tied game vs Pozega and had more luck in the final minutes of the game (66-62). Jessica Warren (18 points, 13 rebounds) and Andrea Glomazic (16 points, 5 rebounds, 4 assists) had a very good game but it was not enough for another win.