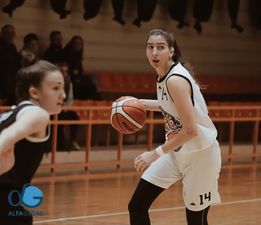 In Bosnia, at the St Valentine Day, Keyera Eaton proved again that she really loves....basketball. 31 points, 6 rebounds, 3 assists and a win vs Brcanka for Jedinstvo (49-86). Keyera is currently the leading scorer of the Bosnian league. Igman had no chance vs Orlovi (39-86). Aleksandra Begenisic did  not play much. She just started and then rested until end of the game (8 minutes, 2 points and 3 rebounds).

In Romania, Targoviste lost at home vs Arad (49-56). Veatriki Akathiotou had another solid performance with 4 points, 7 rebounds and 5 assists. Rapid had no mercy for Agronomia (80-61) but Jordan Hawkins (15 points and 10 rebounds) and Tijana Ninkovic (9 points and 4 rebounds) had good performances. Alexandria defeated Constanta (76-70). Katarina Matijevic played limited minuted and had 3 rebounds in that game. The game between Targu Mures and Oradea was very tied and low scoring (49-38) but once again the home team had a chance to celebrate. Brittney Dunbar finished the game with 8 points, 6 rebounds, 6 assistsa and 6 steals while MC Smelser contributed with 4 points and 6 rebounds. On the other side Teodora Saric played a great game (22 points, 14 rebounds and 7 steals) but it was not enough for a win although she scored most of her team's points.

In Slovenia, Grosuplje hosted Triglav but more experienced guests led by Lejla Omerbasic who had a great shooting night won the game (59:73). Omerbasic scored 17 points and added 4 assists and 3 rebounds.

In Croatian Cup, Tresnjevka dominated vs Pozega and qualified to the next round. Jessica Warren and Andrea Glomazic scored 7 points each for the guests. Warren also added 11 rebounds.