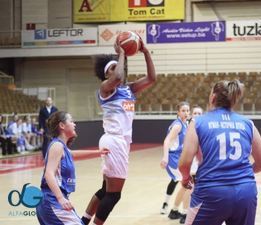 In Bosnia, Keyera Eaton keeps demolishing local defenses. The leading scorer of the league had a great all around performance (22 points, 9 rebounds, 6 assists and 3 steals). Her team Jedinstvo defeated Igman (82-63). Orlovi won another game at home vs Play Off Sarajevo (69-52). Aleksandra Begenisic had a solid performance with 10 points and 7 rebounds.

In Romania, Constanta defeated Rapid (74-66). Katarina Matijevic contributed with 6 points and 6 rebounds. Two days later, on Saturday, Constanta won again vs Sirius Targu Mures (67-57). Matijevic contributed with 5 points and 8 rebounds while Brittney Dunbar had 9 points, 15 rebounds, 7 assists for the guests. Agronomia outscored Oradea (84-52). Jordan Hawkins once again dominated (26 points and 18 rebounds) while Tijana Ninkovic also had a good game with 11 points and 4 rebounds. Oradea was led by Teodora Saric who finished the game with 12 points and 7 rebounds. The following day (Sunday) Oradea lost another game on the road (vs KSE 86-33). Saric scored almost a half of her team's points and finished the game with 15 points and 12 rebounds. Arad defeated Satu Mare at home thanks to a great performance by Veatriki Akathiotou who scored 22 points and added 5 rebounds.

In Slovenia, Triglav lost at home vs Jezice (53-61). Lejla Omerbasic had a good game (12 points, 4 rebounds) but it was not enough to help home team close this game.

In Croatia, Split hosted Pozega and won a very important game in the battle to avoid relegation (72-64). Jessica Warren scored 17 points and added 8 rebounds while Andrea Glomazic finished with 8 points and 4 rebounds for the guests.