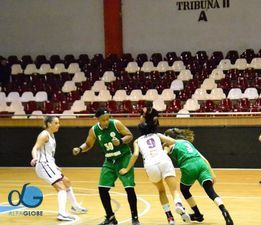 In Romania, the last week of February was very busy. Oradea lost at home against Constanta (57-108) but Teodora Saric had another impressive game (16 points and 5 rebounds). Katarina Matijevic contributed to Constanta's win with 8 points and 9 rebounds. Two days later Oradea played another game at home vs Rapid (39-66). Teodora once again led her team with a double double (19 points, 14 rebounds). Cluj lost at home vs Arad (64-76) and Veatriki Akathiotou helped the guests with 12 points and 2 assists. Sirius Targu Mures was defeated by Rapid (47-72). As usual Brittney Dunbar had an all around performance (10 points, 12 rebounds and 7 assists) while MC Smelser was unable to play due to a knee injury.  Tg. Secuiesc hosted Agronomia and won a close game (72-62). Tijana Ninkovic led the guests in scoring with 17 points and 8 rebounds. Jordan Hawkins contributed with another double double (14 points and 11 rebounds).

In Slovenia, Triglav lost at home vs Jezice (55-71) despite a good performance by Lejla Omerbasic (15 points and 3 rebounds).

In Croatia, Pozega was not able to do much vs Sibenik (63-91) without Jessica Warren (4 points, 3 rebounds) who got injured in the first half. Andrea Glomazic played a good game (16 points, 5 rebounds, 3 assists) but it was not enough to beat the guests from Sibenik.

In Bosnia, Sloboda had no chance vs Orlovi (40-97). Aleksandra Begenisic played only 17 minutes but had a double double (18 points and 12 rebounds). Mladi Krajisnik hosted Jedinstvo in one of the classics of Bosnian championship. The home team won the game (77-67) although Keyera Eaton (16 points, 9 rebounds, 4 assists) had another good game.