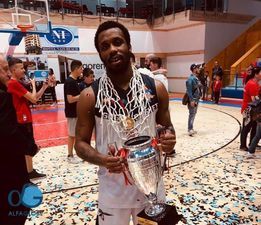 Aaron Walton Moss helped his team Goga Basket from Albania to win the first championship ever in its history. Goga Basket defeated city rivals and Balkan League member Teuta Durres in the finals 81-69 yesterday. It was a decisive game of a long and intense series that was concluded with a great performance of Aaron Walton Moss who once again proved his winning mentality. He won the 2nd championship in a row after leading Bashkimi to the championship in Kosovo a year ago.